New Year's Day is this coming Sunday…welcome to 2012.  This has become a traditional time of celebration.  We party on New Year's Eve and celebrate the moment the clock strikes midnight signaling the beginning of a new year.
And, of course, when the year 2000 arrived we celebrated for twenty-four hours as each time zone around the world welcomed the new millennium on live television broadcasts.
But why and how did the New Year's celebrations become part of our annual routine?  The earliest recorded account of a celebration in honor of the new year dates back four thousand years to ancient Babylon.  For the Babylonians, the first new moon following the vernal equinox announced the arrival of the new year.  They celebrated this spring time event with a massive 11 day religious festival called Akitu.  It was during this time that a new king was crowned or the current ruler's mandate renewed.
Throughout antiquity, civilizations around the world developed more sophisticated calendars with the first day of the year associated with an agricultural or astronomical event.  For example, in Egypt the year began with the annual flooding of the Nile which coincided with the rising of the star Sirius.  In China, the new year occurred with the second new moon after the winter solstice…a day that is still celebrated with many Chinese New Year's celebrations around the world, including a large parade in San Francisco.
The early Roman calendar had 10 months and 304 days with each new year beginning at the vernal equinox.  Tradition holds that it was created by Romulus, the founder of Rome, in the eighth century B.C.  Numa Pompilius, a later king, is credited with adding the months of Januarius and Februarius.  Over the ensuing centuries, the Roman calendar grew out of sync with the sun.  In 46 B.C., Julius Caesar introduced the Julian calendar which closely resembles the more modern Gregorian calendar used today by most countries.
As part of his reform, Julius Caesar declared January 1 as the first day of the year and Romans celebrated by exchanging gifts, decorating their homes, and attending raucous parties.  In medieval Europe, Christian leaders temporarily replaced January 1 as the first day of the year with days carrying more religious significance, such as December 25 as the anniversary of Christ's birth and March 25 as the Feast of the Annunciation.  It was Pope Gregory XIII in 1582 who re-established January 1 as New Year's Day.
In many countries, New Year's celebrations begin on New Year's Eve and continue into the early hours of January 1st.  These celebrations often include specific foods that are said to bring good luck for the coming year—grapes in Spain, round fruits in the Philippines, suckling pig in Austria, soba noodles in Japan, rice pudding in Norway, and black-eyed peas in the southern United States.  Other customs that are common worldwide include making new year resolutions (a practice started by the Babylonians) and watching fireworks displays.
In the United States, the most famous New Year's tradition is the dropping of the giant ball in New York City's Times Square.  This event, first instituted in 1906, occurs at the stroke of midnight.  The original giant ball was made of iron and wood weighing 400 pounds.  Today's giant ball is a brightly patterned sphere 12 feet in diameter and weighing nearly 12,000 pounds.
So, however you celebrate the arrival of the new year…whether you go out to a party, have family or a few friends to your home, or simply curl up by a cozy fire and watch the festivities in Times Square…I wish everyone a happy and healthy new year.
And peace on earth.
Posted by Shawna Delacorte at 9:27 AM 2 comments:

Ancient Roots Of The Christmas Celebration 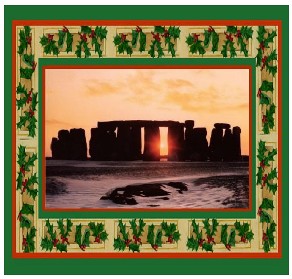 THE MILLIONAIRE'S CHRISTMAS WISH—a conversation with Chance and Marcie