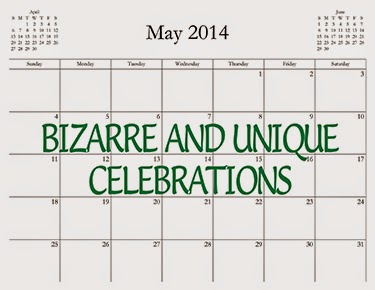 4) National Candied Orange Peel Day
4) Star Wars Day
When: Always on May 4th
It's all because of a play on words! Star Wars Day is May the Fourth, because of a famous quote from the hugely popular science fiction series blockbuster is "May the Force (Fourth) be with you". Great ways to Celebrate Star Wars Day: Watch any of the great Star Wars movies. Better still, have a Star Wars marathon, and watch two or three (or 4) of them. Get out your laser sword and practice for the next invasion from the Evil Empire. Some call this Day "Luke Skywalker Day".

17) Pack Rat Day
When: Always on May 17th
Today is Pack Rat Day. If you are a Pack Rat, you're in good company. You might as well come out of hiding behind those piles of valuable stuff, and celebrate this fun day. Making the decision to discard something of even remotely questionable value, is difficult, if not impossible to do. In keeping with the intent of Pack Rat Day, here are some Do's and Don'ts: Don't clean your room, basement, garage or any other area today. Don't discard anything today...It may be valuable. Don't even empty the trash today. You might have accidentally thrown out something useful. Do keep an eye out for useful stuff being discarded by others. Do go to garage and rummage sales. They can be pack rat gold mines. Do look around your belongings and be thankful for what you have. Do spend time thinking of uses for your things.

20) Be a Millionaire Day (now we all can go for that)
When: Always on May 20th
Everyone wants to enjoy today as a member of the millionaire club, even though a million dollars isn't what it used to be. And after reaching the Millionaire's Club you can work on your qualifications for the Billionaire's Club. If you are a millionaire, savor and enjoy the day. Remember, many Millionaires get there by a combination hard work, sound investment, and frugal spending.
20) Pick Strawberries Day

29) Learn About Composting Day
When: Always May 29th
Composting Day is a great opportunity to "Go Green" and help the environment. Composting is easy. It makes you feel good, knowing you are doing your part to keep our environment a little bit cleaner. As you learn about composting, you will be surprised at all the things you can compost. It is common knowledge, that you can compost garden and yard vegetation, as well as kitchen (vegetable) scraps. But, you can also recycle many other things, including papers, untreated wood, and cardboard. Cardboard paper towel and toilet paper holders are great items to compost. You can use compost around your plants, to feed them, keep the weeds down, and to help retain soil moisture.


Worldwide No Tobacco Day brings awareness of the health issues and dependency issues related to tobacco use. World No Tobacco Day stresses the importance of making people all over the world aware of the health dangers of using tobacco. In 1987, the World Health Organization Assembly passed Resolution WHA40.38, calling for 7 April 1988 to be a "a world no-smoking day." In 1988, Resolution WHA42.19 was passed, calling for the celebration of World No Tobacco Day, every year on 31 May.
Posted by Shawna Delacorte at 12:25 PM No comments: 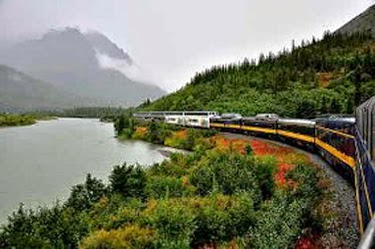 It's been a long, cold, and snowy winter. And now that Spring is officially here, it's time to start thinking about summer vacations. This year you might want to consider a train trip.

Train travel in Europe is very commonplace. Whenever I travel to the UK, I always buy a Brit Rail pass before I go and use it for traveling all over Britain—day trips out of London to such places as Windsor, Oxford, Bath, Stratford-Upon-Anon and longer trips such as travel to Scotland.

And in the U.S., with more and more restrictions and inconveniences put on airplane passengers and airlines constantly adding fees and surcharges on top of the ticket price, train travel has had quite a resurgence. Warren Buffett recently made a $44 billion investment in a railroad company. And with gasoline prices on the rise again (just in time for summer vacation), not surprisingly the last two years have been the best in Amtrak's history. With the suggested arrival time at the airport now being two hours prior to your flight departure, the reduced number of flights which creates longer wait time when you need to change planes for a connection, even a short flight now takes a lot more of your time than it used to.

The Travel Channel on cable television has a couple of shows about scenic train travel in America.

One of the nation's best rides is Amtrak's Southwest Chief that goes from Chicago to Los Angeles and gives the traveler a way to relive America's expansion west from the 1800s. The train trip lasts a little over forty hours, traveling through Illinois, Missouri, Kansas and the famous wild west town of Dodge City, setting for the long-running television series Gunsmoke. From there it continues into Colorado and New Mexico. Then across northern Arizona with the availability of a side trip to the Grand Canyon on a historic old steam train.  And finally into Union Station in downtown Los Angeles.

With only a few exceptions, this ride is on the same tracks that were once the Santa Fe Railway which was built along the old Santa Fe wagon train trail, a route that also inspired the highway of the days before Interstates criss-crossed the country—the famous Route 66.

The West Coast's Coast Starlight is considered by most travelers to be Amtrak's most scenic route.  It runs along the Pacific Ocean between Los Angeles, California, and Seattle, Washington, traveling through some truly spectacular scenery.

From California, the classic route east is the California Zephyr, following the path of the first transcontinental railway between San Francisco and Chicago. It visits such places as Sacramento, Reno, Salt Lake City, across the Rockies to Denver, through Nebraska and Iowa to Chicago.

By taking the Southwest Chief in one direction and returning on the California Zephyr, you are traveling what the Gilded Age tourists in the 1880s and 1890s called the Grand Tour of America.

If you want a ride that goes through the heart of the country, try the Texas Eagle starting in Chicago. It crosses the Mississippi River at St. Louis, travels down through the Ozarks, across Arkansas into eastern Texas, and continues through Dallas, Fort Worth, Austin, and on to San Antonio where it connects with the Sunset Limited to Los Angeles.

The East Coast relies much more on rail service than the rest of the country, especially the heavily used tracks in the high traffic corridor between Boston and Washington, D.C.

One of the country's first scenic rail routes is the Empire Service from New York City up through the Hudson River Valley where Washington Irving's Ichabod Crane encountered the Headless Horseman of Sleepy Hallow.

And if you're on the East Coast and are heading to Florida, you can take the Auto Train where your car travels with you. Passengers board just south of Washington, D.C., and their vehicles are loaded on the train. The trip terminates just outside Orlando, Florida.

Maybe you're not planning a vacation by train, but would like the train experience. There are lots of day trips in various parts of the country, including vintage steam and narrow gauge railroads.  My personal favorite is the Napa Valley Wine Train in California, which includes winery stops. Alaska Railway's White Pass & Yukon Route offers a three hour tour through some truly dramatic scenery.

Have any of you taken a train vacation? A day trip train tour?
Posted by Shawna Delacorte at 11:57 AM No comments: 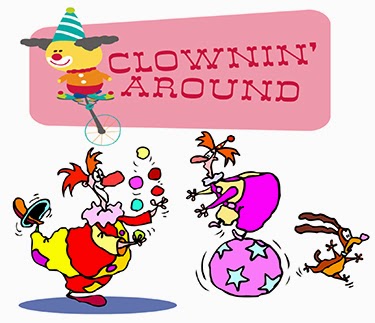 America is suffering from a clown shortage!  No, I'm not talking about politics.  I'm talking about those men and women with the painted faces and funny clothes who entertain and make us laugh.

According to the World Clown Association, the country's largest organization of its kind, there has been a drastic decline in membership over the last ten years.  The reason is a sad one…the professional clown population is dying off.  As the older clowns die, there aren't enough younger aspiring clowns enrolling in clown school to take their place.  It seems that today, those seriously interested in being clowns when they are younger, abandon the desire after graduating from high school and college because clowning is 'no longer cool'.  So, they set aside what had once been a keen interest.  (Hmmm…is it appropriate to use the words seriously and clown in the same sentence?)

Another possible reason for the decline in the professional clown population is more rigorous hiring practices by organizations such as Ringling Bros.  Their tryouts have become more challenging resulting in fewer applicants. Audience expectations has also played a part in this decline.  Ringling Bros. director of talent said, "No longer is it good enough to just drop your pants and focus on boxer shorts.  Our audience expects to be wowed."

In addition to the places like the Ringling Bros. and Barnum & Bailey Circus, and other circus and carnival venues, that could also put a real crimp in something as simple as hiring that clown for your child's birthday party.
Posted by Shawna Delacorte at 12:06 PM No comments: