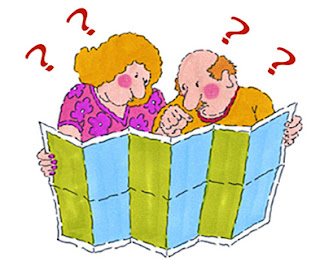 It's the start of the summer tourist season (in the Northern Hemisphere). Some of us will be tourists and some of us will encounter tourists.  And tourists invariably ask questions.

At one time or another when we were in school, we've probably all heard a teacher say that there is no such thing as a stupid question in an attempt to get us to express our curiosity about something without being embarrassed.

However, as an adult that old adage doesn't apply to all situations.  The travel industry is filled with weird, quirky, and in some cases just plain stupid questions asked by tourists.  Here's a sampling of some from various sources.

Actual Questions Asked On Cruise Ships:
Does the crew sleep on board?
Is the island surrounded by water?
What happens to the ice sculptures after they melt?
What time is the 2 o'clock tour?
Can you see the equator from the deck?
I know that ships often serve smoked salmon, but I am a non-smoker.
Can the iced tea be served hot?
Will I get wet if I go snorkeling?
Should I put my luggage outside the cabin before or after I go to sleep?
Does the outside cabin mean it's outside the ship?
Where is the good shopping in Antarctica?

The Daily Telegraph in the United Kingdom put together an international list "of the most inexplicably simple queries fielded by tourism officials."
Are there any lakes in the Lake District?
Why on earth did they build Windsor Castle on the flight path for Heathrow?
Is Wales closed during the winter?
Why did they build so many ruined castles and abbeys in England?
Do you know of any undiscovered ruins?

And here are some tourist questions asked at Niagara Falls:
What time do the falls shut off?
How far into Canada do I have to go before we have to drive on the other side of the road?
How much does it cost to get into Canada and are children a different price?

And here are some goodies from Minnesota:
I'm coming in July and want snowmobile rental information.
We want to tour the Edmund Fitzgerald. (the ship sank in Lake Superior during a storm in 1975)
One traveler asked to see the bridge in Minnesota with the arches.  She was shown various photos, none of which were the bridge she was looking for.  She finally identified a picture of the St. Louis Gateway Arch as the bridge she wanted to see.  She was given directions to Missouri.

And finally…these tidbits.
One tourist to Scotland asked what time they fed the Loch Ness Monster.  Another visitor to New York City thought they would end up in Holland if they drove through the Holland Tunnel.  A traveler in Miami asked a tourism official which beach was closest to the ocean.

So…I guess the bottom line is to maybe think about that question a second time before you actually ask it.   :)

Posted by Shawna Delacorte at 11:35 AM No comments:

MEMORIAL DAY: A Holiday With A Dual Distinction 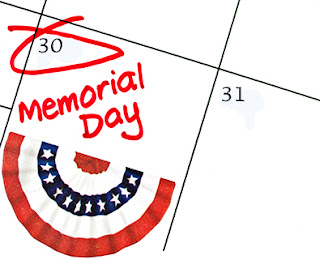 The last Monday in May, this year falling on May 30th, is Memorial Day in the United States—a holiday honoring the men and women who died while serving in the U.S. military. Originally known as Decoration Day, it originated in the years following the Civil War but didn't become an official federal holiday until 1971.

In addition to being a day observed by many Americans visiting cemeteries or memorials, holding family gatherings, and participating in patriotic parades, it's also considered the unofficial start of the summer season and vacation time.

The Civil War claimed more lives than any conflict in U.S. history. This required the establishment of the country's first national cemeteries. In the late 1860s, Americans in various small towns and large cities held springtime tributes to fallen soldiers by decorating their graves with flowers. On May 5, 1868, General John A. Logan proclaimed May 30th as Decoration Day, the date chosen because it was not the anniversary of any particular battle.

On the first Decoration Day General Logan made a speech at Arlington National Cemetery where 5,000 participants decorated the graves of 20,000 Union and Confederate soldiers buried there.

Decoration Day originally honored only those lost while fighting in the Civil War. But by the time the U.S. became involved in World War I, the holiday evolved to commemorate American military personnel who died in all wars.

The name Decoration Day gradually changed over to Memorial Day during the ensuing years, but continued to be observed on May 30th. In 1968, one hundred years after General Logan made his Decoration Day proclamation, Congress passed the Uniform Monday Holiday Act which established Memorial Day as the last Monday in May in order to create a three-day weekend for federal employees. This law also declared Memorial Day to be a federal holiday. The change went into effect in 1971.

In addition to nationwide parades and the decorating of graves and monuments, Memorial Day has come to hold a second distinction. It is also a time of many family gatherings which include backyard BBQs and picnics. With an official date of the last Monday in May, the holiday is considered the unofficial start of summer and the beginning of the vacation travel season in the Northern Hemisphere with the Labor Day holiday on the first Monday of September signaling the unofficial end of the summer season.

Many recreational boaters launch their boats on lakes and rivers over the Memorial Day weekend for the first outing of the summer. Tourist attractions gear up for the summer vacationers. And a sure sign of the start of the summer season—in spite of the lower gasoline prices of late, all across the country gasoline prices usually go up in preparation of increased need!

Posted by Shawna Delacorte at 1:55 PM No comments: