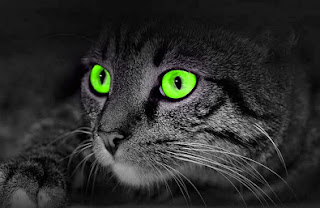 Science has known that birds, insects, reptiles, and fish can detect ultraviolet light. Recent studies show that more animals share this ability than originally believed. A new study shows that cats and dogs may be able to see UV, too.

Cats are nocturnal and have been thought of as being able to "see in the dark." They have long been a symbol of the mysterious. It's now believed they can see things invisible to humans such as psychedelic stripes on flowers and flashy patterned feathers on birds. The secret to this is ultraviolet light detection, an ability shared by many animals but not humans. Snow reflects UV but white fur does not, allowing reindeer to see polar bears at a distance. Humans would just see a blur of all white.

It is assumed that most mammals do not see UV because they have no visual pigment sensitive to UV. They have lenses like those of man that prevent UV from reaching the retina. Certain people, such as those who have had their lenses replaced during cataract surgery, can see some UV, but most humans cannot.

Humans are good at seeing detail. If we didn't have a lens that removed the UV so that we don't see it, the world would appear more blurry.

Email ThisBlogThis!Share to TwitterShare to FacebookShare to Pinterest
Labels: cats

Dogs—commonly referred to as man's best friend. Somewhere between 11,000 and 15,000 years ago, dogs were among the first of the animals to be domesticated by man and are well known for being loving and loyal. They also have many lesser-known and quite fascinating traits.

10) They have 3 eyelids. Like people, dogs have top and bottom ones that move up and down. They also have one that originates in the corner of the eye and moves side to side. Its purpose is to clear mucus and debris from the eye.

9) Dogs really do love their humans. MRI scans reveal that when presented with the scents of various people and canines, the reward centers of the dog's brain is most responsive to the aromas of their human companions.

8) They're just as smart as toddlers. Specially designed IQ tests show that dogs' capabilities are on par with the typical 2-year-old. That means they're capable of learning over 150 words and gestures.

7) Dog paws often smell like snack foods. There's some debate as to whether the particular scent is popcorn or corn chips, but either way the cause of it has been linked to a bacteria dogs pick up while walking.

6) Canines possess the ability of night vision. It's not on the same level as cats, but it is superior to that of humans. A dog's pupils are larger and their central retinas have more cells dedicated to light sensitivity than to color detection. That gives them an upper hand when it comes to making out objects in dim light.

5) Every nose is unique. The Canadian Kennel Club has been using nose prints as a means of individual identification since the 1930s and many organizations have followed suit.

4) They most likely dream. Proof isn't at the 100 percent mark, but there is an abundance of support backing the claim. Much of it is based on brain attributes and behaviors that dogs and humans share. Among them are structure and the occurrence of electrical impulses during the deep sleep stage.

3) Fur isn't just about warmth. In the summer it acts as insulation, keeping heat from reaching their bodies. Fur also protects their skin from the sun's damaging rays.

2) They really do listen when you talk. Even better, they've been shown to understand a lot of what's being said. Though they're not able to decipher the words, dogs can interpret certain sounds and the message's overall emotional tone.

1) Dogs aren't nearly as sweaty as humans. That's largely because rather than having sweat glands all over the bodies, as people do, dogs only have them in their paws. To cool off, they rely mostly on panting.

Posted by Shawna Delacorte at 1:28 PM No comments: