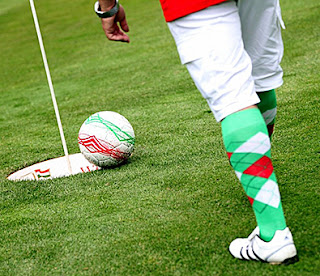 I heard about this sport on the news one morning. Footgolf? What in the world is footgolf? I felt compelled to check it out.

As the name implies…it's golf played with the feet, a combination of golf and soccer. The definition I found said, "Footgolf is a precision sport where players kick a football [for those of us in the U.S., football refers to soccer] into a cup in as few shots as possible. Its name is a combination of 'football [soccer]' and 'golf.' It is closely related to golf."

The object of the game is to play either a 9-hole course or an 18-hole course, kicking the ball into each hole in as few shots as possible and the person having the lowest score wins the game.

The origins of footgolf are unclear and have been attributed to several countries. The first 9-hole footgolf tournament played on a golf course as the sport is known today was organized in the Netherlands in 2009. The first Footgolf World Cup was held in Budapest, Hungary, in June 2012 with 8 countries participating—Argentina, Belgium, Greece, Hungary, Italy, Mexico, Netherlands, and the United States. About 80 players played 18-holes on the first day and another 18-holes on the second day.

Footgolf is a growing sport, due in part to the 2008-2012 world-wide recession which produced declining revenue for golf courses. With the advent of footgolf, some existing traditional golf courses have been converted to footgolf in addition to new footgolf courses being built. Without the need for all those expensive golf clubs, golf bags, and other associated paraphernalia, it's a more financially feasible sport.

Posted by Shawna Delacorte at 12:43 PM

Email ThisBlogThis!Share to TwitterShare to FacebookShare to Pinterest
Labels: Footgolf

I heard about this about a month ago and wondered what it was. Now I know!

I've seen these setups but never knew what it was for. Thanks D. V.

Jennifer: I got the impression that it's more popular in Europe but is starting to get a following in the U.S.

Babs: Glad you enjoyed it.

D.V.: I'd like to see one just to see what it looks like for real (as opposed to just the one picture I used).