The Legend of St. Nicholas 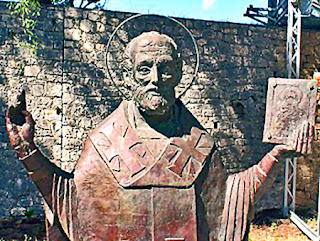 Who is that man in red? The man who, every Christmas Eve, brazenly breaks into people's homes, helps himself to cookies and milk, and leaves things behind resulting in a mess of wrapping paper and ribbon for others to clean up the next morning. Reindeer and a heavily laden sleigh can't be good for the roof. Soot from a chimney tracked all over the floor…something else left behind for others to clean.

Yet every year we anxiously anticipate his arrival, track his progress through the skies, and welcome him into our homes.

Santa Claus can be traced back hundreds of years to a monk named St. Nicholas. It is believed that Nicholas was born sometime around 280 A.D. in Patara, near Myra in modern-day Turkey. Much admired for his piety and kindness, St. Nicholas became the subject of many legends. It is said that he gave away all of his inherited wealth and traveled the countryside helping the poor and sick. One of the best known of the St. Nicholas stories is that he saved three poor sisters from being sold into slavery or prostitution by their father when he provided them with a dowry so they could be married. Over the course of many years, Nicholas' popularity spread and he became known as the protector of children and sailors. His feast day is celebrated on the anniversary of his death, December 6. This was traditionally considered a lucky day to make large purchases or to get married. By the Renaissance, St. Nicholas was the most popular saint in Europe. Even after the Protestant Reformation, when the veneration of saints began to be discouraged, St. Nicholas maintained a positive reputation, especially in Holland.

St. Nicholas made his first inroads into American popular culture towards the end of the 18th century. In December 1773, and again in 1774, a New York newspaper reported that groups of Dutch families had gathered to honor the anniversary of his death.

The name Santa Claus evolved from his Dutch nickname, Sinter Klaas, a shortened form of Sint Nikolaas (Dutch for Saint Nicholas). In 1804, John Pintard, a member of the New York Historical Society, distributed woodcuts of St. Nicholas at the society's annual meeting. The background of the engraving contains now-familiar Santa images including stockings filled with toys and fruit hung over a fireplace. In 1809, Washington Irving helped to popularize the Sinter Klaas stories when he referred to St. Nicholas as the patron saint of New York in his book, The History of New York. As his prominence grew, Sinter Klaas was described as everything from a rascal with a blue three-cornered hat, red waistcoat, and yellow stockings to a man wearing a broad-brimmed hat and a "huge pair of Flemish trunk hose."

Gift-giving, mainly centered around children, has been an important part of the Christmas celebration since the holiday's rejuvenation in the early 19th century. Stores began to advertise Christmas shopping in 1820, and by the 1840s, newspapers were creating separate sections for holiday advertisements, which often featured images of the newly-popular Santa Claus. In 1841, thousands of children visited a Philadelphia shop to see a life-size Santa Claus model. It was only a matter of time before stores began to attract children, and their parents, with the lure of a peek at a live Santa Claus. In the early 1890s, the Salvation Army needed money to pay for the free Christmas meals they provided to needy families. They began dressing up unemployed men in Santa Claus suits and sending them into the streets of New York to solicit donations. Those familiar Salvation Army Santas have been ringing bells on the street corners of American cities ever since. 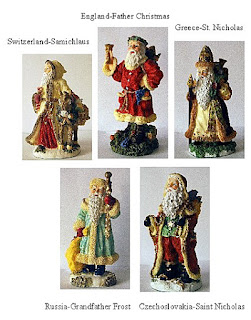 A Santa by Any Other Name

18th-century America's Santa Claus was not the only St. Nicholas-inspired gift-giver to make an appearance at Christmastime. Similar figures were popular all over the world. Christkind or Kris Kringle was believed to deliver presents to well-behaved Swiss and German children. Meaning Christ child, Christkind is an angel-like figure often accompanied by St. Nicholas on his holiday missions. In Scandinavia, a jolly elf named Jultomten was thought to deliver gifts in a sleigh drawn by goats. British legend explains that Father Christmas visits each home on Christmas Eve to fill children's stockings with holiday treats. Pere Noel is responsible for filling the shoes of French children. In Russia, it is believed that an elderly woman named Babouschka purposely gave the wise men wrong directions to Bethlehem so that they couldn't find Jesus. Later, she felt remorseful, but could not find the men to undo the damage. To this day, on January 5, Babouschka visits Russian children leaving gifts at their bedsides in the hope that one of them is the baby Jesus and she will be forgiven. In Italy, a similar story exists about a woman called La Befana, a kindly witch who rides a broomstick down the chimneys of Italian homes to deliver toys into the stockings of lucky children. 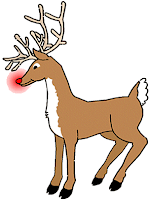 Rudolph, "the most famous reindeer of all," was born over a hundred years after his eight flying counterparts. The red-nosed wonder was the creation of Robert L. May, a copywriter at the Montgomery Ward department store.

In 1939, May wrote a Christmas-themed story-poem to help bring holiday traffic into his store. Using a similar rhyme pattern to Moore's 'Twas the Night Before Christmas, May told the story of Rudolph, a young reindeer who was teased by the other deer because of his large, glowing, red nose. But, when Christmas Eve turned foggy and Santa worried that he wouldn't be able to deliver gifts that night, the former outcast saved Christmas by leading the sleigh with the light of his red nose. Rudolph's message—that given the opportunity, a liability can be turned into an asset—proved popular. Montgomery Ward sold almost two and a half million copies of the story in 1939. When it was reissued in 1946, the book sold over three and half million copies. Several years later, one of May's friends, Johnny Marks, wrote a short song based on Rudolph's story (1949). It was recorded by Gene Autry and sold over two million copies. Since then, the story has been translated into 25 languages and been made into a television movie, narrated by Burl Ives, which has charmed audiences since 1964.

Posted by Shawna Delacorte at 8:56 AM

Lucy: Many years ago, I worked at a television station in Los Angeles that Gene Autry owned. One year at Christmas time, he wandered on the stage where we were working and did a spontaneous singing of "Rudolph, The Red Nosed Reindeer."