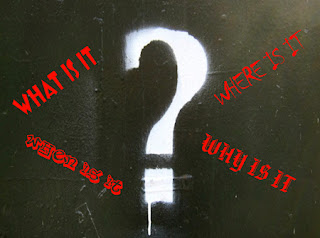 A while back I saw a list titled 9 All Time Unsolved Mysteries.  The items listed…well, some were a surprise that they made an All Time list and I was curious about some that were left off the list.  This list consisted only of places and things with no mention of specific people.  I guess that explains why the mystery of Jack The Ripper's identity (actually, he was identified by a DNA match a few years ago), what happened to Amelia Earhart, and exactly who took that axe and gave Lizzie Borden's parents all those whacks didn't make the list.

Two of the items on the list were new to me—the Chase Vault and the Taos Hum.  I've been to Taos…didn't hear about this mystery and didn't hear the hum.

So, confusion in hand about what made the list and what didn't, I present—in no particular order—9 All Time Unsolved Mysteries.

Myth or reality?  The lost continent from ancient times [rather than the current Caribbean resort :) ] is one of the world's favorite legends.  Most of what we know about Atlantis comes from the Greek philosopher Plato who wrote about it approximately 2000 years ago although the story of the ancient civilization places its time at 9000 years prior to that.  He described Atlantis as a huge island where brave and virtuous people…a highly advanced civilization…lived in a kind of paradise.  He placed its location west of the Pillars of Hercules, known today as the Straits of Gibraltar.  The story claims that the physical disappearance of the actual island came as a result of a massive earthquake or volcanic eruption that caused it to sink into the ocean.  To this day debate continues about whether Atlantis was real or myth and people continue to literally search all over the world for the remains of the lost continent with several diverse and wide spread locations declared to be Atlantis. 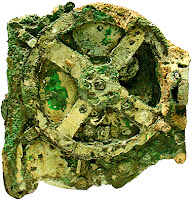 Discovered in October 1900 in a shipwreck off the coast of the Greek island of Antikythera, this machine contains the oldest known complex gear mechanism…sometimes referred to as the world's first analog computer.  It's estimated to have been made in the first century B.C. and appears to have been constructed on theories of astronomy and mathematics.  The device is believed to be made from a bronze alloy of 95% copper and 5% tin, but its advanced state of corrosion from having been in the ocean for almost 2000 years has made it impossible to perform an accurate analysis.  It's precise functions have not been scientifically confirmed.

This mystery begins in 1808 in Barbados when the wealthy Chase family purchased an 80 year old vault to inter their dead relatives.  At the time they acquired the used vault, it contained only one occupant—Thomasina Goddard.  Col. Thomas Chase made the decision not to disturb Goddard, so she was not moved to another vault.  Shortly after that, young Mary-Anne Maria's body was added to the vault.  Then 4 years after that, the vault was opened to inter her sister's body.  Only a month after that, Col. Thomas himself passed away.  And that's when the legend takes hold.  Coffins had moved, some were standing on end.  Vandals were blamed.  Everything was returned to its original position and the vault once again closed and sealed.  From then on, every time the vault was opened to admit another coffin, the vault's contents would be in disarray, including Col. Thomas' heavy casket which took 8 men to lift.  No seals had been broken, no evidence of illegal entry into the vault, no evidence inside the vault of anyone being there as the sandy floor was undisturbed with no signs of flooding or earthquake.  The Chase family bodies were eventually moved to other burial sites in the cemetery and all incidents stopped.

6)  NAZCA LINES--Peru
The Nazca Lines were discovered by accident when a small airplane flew over the arid Peruvian coastal plains in 1927.  More lines were discovered nearby at the end of the 1980s.  The lines depict animals and geometric forms, many of them several kilometers in length with some of them only recognizable from an airplane.  The most outstanding shapes depict the figures of a spider, monkey, dog, small lizard, hummingbird, condor, and what appears to be an astronaut.  The lines were scratched into the desert between 500 B.C. and 500 A.D.  They are believed to have had ritual astronomical functions.  Others believe they were meant as sign posts for ancient extraterrestrials.  UNESCO named the Nazca Lines an Archaeological World Heritage Site in 1994.

Roughly 64 square miles in area and located in the South Pacific approximately 2,300 miles from Chile, Easter Island was named by Dutch explorers in honor of the day they discovered it in 1722.  It was annexed by Chile in the late 19th century.  The mystery of Easter Island centers around the almost 900 giant stone figures that are centuries old and are distinctive from other stone sculptures found in various Polynesian cultures.  The purpose of the statues, how they were constructed and transported is still a matter of speculation.  Today, Easter Island's economy is based on tourism.

June 30, 1908, a mighty explosion occurred in this remote area of Siberia.  It was 1927 before a scientific expedition investigated the site.  They found 800 square miles of remote forest ripped apart, 80 million trees on their sides in a radial pattern.  They acted as markers pointing directly away from the blast's epicenter.  When the members of the expedition arrived at ground zero, they found the trees standing upright but all the limbs and bark had been stripped away, resembling a forest of telephone poles.  This phenomenon was seen again 37 years later at another massive explosion in Hiroshima, Japan, at the end of World War II.  More than a century after the Tunguska Explosion there is still debate over the cause, but the generally agreed upon theory is that a space rock approximately 120 feet across entered the atmosphere above Siberia at about 33,500 miles per hour, heated the surrounding air to 44,500 degrees Fahrenheit and self-exploded at an altitude of about 28,000 feet producing a fireball and releasing energy equivalent to 185 Hiroshima atomic bombs.  The majority of the asteroid was consumed by the explosion so there was no impact crater.

The Piri Reis Map is often cited as proof that civilization on Earth was once very advanced then for unknown reasons disappeared with man only now gaining any understanding of this mysterious cultural decline.  In addition to the map's historical interest, it contains details that no European could have known in the early 1500s.  The Sumerians in Mesopotamia are the earliest known civilization and appeared on the scene apparently from out of nowhere around 4000 B.C. but had no nautical or maritime cultural heritage.  Piri Reis' own commentary indicates some of his source maps in creating his map were from the time of Alexander The Great (332 B.C.).  The map shows that the makers knew the accurate circumference of the Earth to within 50 miles.  The depicted coastline and island shown in Antarctica are as they were prior to 4000 B.C. when they were ice free.  Debate continues with no clear answers of how Piri Reis could have created such an accurate map at that time.

The Taos Hum is a low-pitched mechanical buzzing sound often heard in Taos, New Mexico.  Not everyone can hear it, but those who do say it's driving them crazy.  Apparently it begins suddenly as if someone had turned on a switch, never abates, interferes with their sleep, and is more noticeable inside the house than outside.  In 1993 residents requested that Congress carry out an investigation into the source of the hum, but no specific causes were uncovered.  In 1997, Congress asked various scientists from several elite research institutes to look into it.  So far, no concrete facts have been uncovered to prove exactly what is causing the hum or what it is that allows some people to hear it and others to not hear it.  I've been to Taos and did not hear any hum/mechanical buzzing sound.

There is intense debate among scientists, theologians, historians, and researchers about the origins of the shroud and its image.  The shroud is housed in the royal chapel of the Cathedral of Saint John the Baptist in Turin, Italy.  It is a linen cloth showing the image of a man who appears to have suffered physical trauma of the type consistent with crucifixion.  This image is commonly associated with Jesus Christ, his crucifixion and burial.  In 1988 a multi-national scientific group did a radiocarbon dating test on small samples of the shroud and concluded that the samples they tested dated from the Middle Ages, between 1260 A.D. and 1390 A.D.  Since 2005, at least four articles have appeared in scholarly publications stating the cloth samples used were not representative of the whole shroud.  To this day, the shroud continues to be a much studied and controversial artifact.

Are there any unsolved mysteries of place or thing that you think should have been on this list?

Posted by Shawna Delacorte at 1:11 PM

How about the legend of the Dutchman's mine? And also, the Bermuda Triangle?

Gosh this was a fun and interesting read. Thanks for posting.

Roni: There are several more than those I listed. As you said, the Lost Dutchman Gold Mine in Arizona, the Bermuda Triangle. Then there's the Alaska Triangle, the Loch Ness Monster, and the list goes on.

Gini: I'm glad you enjoyed it.