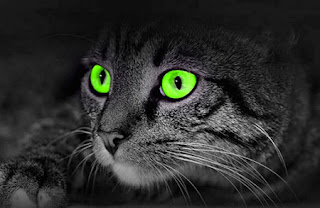 Science has known that birds, insects, reptiles, and fish can detect ultraviolet light. Recent studies show that more animals share this ability than originally believed. A new study shows that cats and dogs may be able to see UV, too.

Cats are nocturnal and have been thought of as being able to see in the dark. They have long been a symbol of the mysterious. It's now believed they can see things invisible to humans such as psychedelic stripes on flowers and flashy patterned feathers on birds. The secret to this is ultraviolet light detection, an ability shared by many animals but not humans. Snow reflects UV but white fur does not, allowing reindeer to see polar bears at a distance. Humans would just see a blur of all white.

It is assumed that most mammals do not see UV because they have no visual pigment sensitive to UV. They have lenses like those of man that prevent UV from reaching the retina. Certain people, such as those who have had their lenses replaced during cataract surgery, can see some UV, but most humans cannot.

Humans are good at seeing detail. If we didn't have a lens that removed the UV so that we don't see it, the world would appear more blurry.

Posted by Shawna Delacorte at 11:45 AM