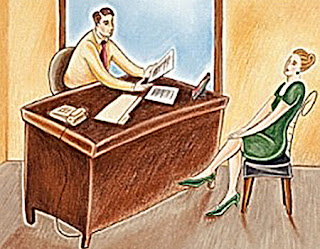 We all know that going on a job interview is cause for varying degrees of anxiety.  We're uncomfortable, very concerned about making a good impression both personally and with our resume and work history.  Saying the wrong thing…misspeaking…is upper in our mind.

All of this discomfort is part of the process.  But, there are those who go beyond the bounds of mere jittery nerves.  The following comments were actually said during the course of a job interview.

Q:  Why did you leave your last job?

A:  "I have a problem with authority."

Q:  Why should we hire you?

A:  "I would be a great asset to the events team because I party all the time."

Q:  Do you have any questions?

Q:  Why are you leaving your current job?

A:  "I was fired from my last job because they were forcing me to attend anger management classes."

Q:  What are your weaknesses? [related to job skills]

A:  "I get angry easily and I went to jail for domestic violence.  But I won't get mad at you."

Q:  When have you demonstrated leadership skills?

A:  "Well my best example would be in the world of online video gaming.  I pretty much run the show.  It takes a lot to do that."

Q:  Is there anything else I should know about you?

A:  "You should probably know I mud wrestle on the weekends."

Q:  Have you submitted your two weeks' notice to your current employer?

The following are random responses and comments made by job seekers at interviews.

"If I get an offer, how long do I have before I have to take the drug test?"

"When you do background checks on candidates, do things like public drunkenness arrests come up?"

"May I have a cup of coffee?  I think I may still be a little drunk from last night."

[During a telephone call to schedule the interview]  "Can we meet next month?  I am currently incarcerated."

While we put a lot of effort into that all important job hunt, we should not be so anxious to land a job…any job…that we ignore those red flags trying to tell us this might not be the best place to work.

While those red flags might be flying during your interview, you could be so busy talking about how well you work with your team or bragging about your killer sales record that you don't see them flapping in the wind trying to get your attention. Or you pretend you don't see them. You pretend you don't hear the interviewer complain about a colleague or working long hours. Or you decide it's no big deal that she interrupted your interview twice to take a call.

If getting the job means a large pay increase, or if you've been looking for a job for quite a while with no luck, you're more likely to ignore the signs. But if you don't want to be job hunting again in a few months, you need to pay attention to those red flags.

The good news is that there are usually clues during the interview process that you could be heading for trouble. Spot any of these signs, and you may want to turn down that job offer you've been seeking.

And rescheduling your interview a few times doesn't bode well, either. Your interviewer might be overworked or disorganized, and you really don't want to work in that type of situation and atmosphere.

Your interviewer hasn't reviewed your résumé. If the hiring manager isn't familiar with your background, you have to wonder why you're being interviewed at all. If the person who is doing the hiring hasn't taken the time to read your résumé then that person isn't doing their job.

Ideally, the hiring manager and your potential boss will have called you in because they've carefully read and discussed your résumé and read your online profiles. If they haven't done this, they're not invested enough in bringing in the right person, or they're just desperate to hire someone…anyone.

There's confusion about the position. Sometimes you get called in for an interview through a referral or because you have a great résumé, and the manager is trying to figure out where you fit. You may wind up getting hired, but the job you get might not be best suited to you.

Taking a job because you like the company or the manager isn't enough. Try to pin down specifics about what you will do and how you will be evaluated. Can't get any information? Perhaps it's best to walk away.

Your interviewer checks email and texts. It's just too rude. Your interviewer should be paying attention to the interview, not checking his cell phone. And if someone is that uninterested in what you are saying, there's a good chance that you won't be hired anyway.

The department has a lot of turnover. During your interview, ask why the previous employee in that position resigned, as well as how long that employee had been in that specific job and how long with the company. When you meet other team members, ask them about their career paths.

If many team members are recent hires, be sure there is a sound business reason for the hiring spree, such as a new product or client or a round of funding. Otherwise, too much employee turnover hints at a toxic boss, culture, or work atmosphere.

You hear negative comments about the job situation you're interested in or read them online. If your interviewer criticizes the person you will be replacing, other team members, a boss or even the company in general, don't disregard it as unimportant. It isn't professional, and it might mean you will be working for someone who doesn't respect other people or is impossible to please.

Pay attention to negative comments in online reviews of the company as well. A few negative reviews are one thing—there are always a few disgruntled employees. But if there are many such comments, consider yourself warned. Look for patterns in the comments, too. If the same negative words or phrases pop up in many reviews, such as political, lacking vision or endless hours, the problem might be the general atmosphere or the leadership, rather than a single manager.

So, with all of this information at your fingertips…good luck with the job search!

Posted by Shawna Delacorte at 5:57 AM