THE SEDGWICK CURSE—A conversation with Taylor and Donovan 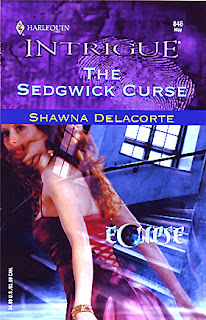 With Halloween arriving in a month, I thought it would be appropriate to start a series of Halloween blogs by featuring an interview with Taylor MacKenzie and Lord Donovan Sedgwick, from my Harlequin Intrigue mystery/romantic suspense novel THE SEDGWICK CURSE, one of my 17 Harlequin ebook reissues from my 21 Harlequin backlist of print titles.

Good morning and thanks to both of you for joining us today.  I think my first question is for you, Lord Sedgwick.

Donovan:  Please, call me Donovan.  (pauses) I still haven't been able to completely reconcile being the owner of the title, especially considering the circumstances that passed it on to me from my father.

It's a title that's been in your family for a long time, isn't it?  Along with the large estate located in the Cotswolds area of England?

Donovan:  A very long time…for centuries to be exact, starting in the late 1600s after the monarchy was restored to the throne with Charles II.  (brightens as he grasps Taylor's hand)  But on the other side, if my family history hadn't taken a strange twist along the way I never would have met this lovely lady and would have always felt as if something very important was missing from my life.

So, Taylor…your family history and Donovan's family history were somehow connected?  You're from the United States and had never been to England prior to your initial meeting with Donovan, is that correct?

Taylor:  Yes, it was over a century ago that the connection between our families resulted in the curse placed on the Sedgwick family.  In my correspondence with Donovan's father, I lied about the purpose of my trip to England.  The reality of it was to trace the origins of the crime that had resulted in the brutal death of my great grandmother and great grandfather who were tenant farmers on the Sedgwick estate.  My grandmother was an infant at the time and was whisked away to safety by some of the villagers and eventually arrived in America by way of Canada.

Donovan…you didn't have any idea who Taylor was when she showed up at your front door one night?

Donovan:  (chuckles) The name Taylor misled me. I assumed my father had been dealing with a man who wanted to research the annual festival we hold on the estate grounds for a book he was writing on British country festivals.  Our particular festival has been an annual event for over 250 years.  My father had invited the writer to stay at the house while doing research.

And Taylor was that 'man'?

Donovan:  (sly grin) She didn't fool me for a moment.  I knew as soon as I opened the door that it wasn't a man standing there!  (turns serious) But her timing was terrible.  My father had…uh, he had died a couple of months earlier.  It was the night before her arrival that the century old curse had seemed to come to fruition with the evil of the past turned loose on the present, followed by a string of grisly murders…

(Donovan's voice trailed off and Taylor picked up the conversation).

Taylor:  I had never been as frightened in my life as I was shortly after I arrived at the Sedgwick estate that night.  I felt as if I was being stalked by some evil presence.  Sometimes it seemed so close that I could literally reach out and actually touch it.  Or worse yet, that it could touch me.

Was there someone…or something…actually stalking you?  Was any of it real or merely the result of the centuries-old gothic atmosphere of the older sections of the house?

Taylor:  Oh, it was real…very real.  And so was the resulting danger.

Donovan:  There was much more going on than just the sense of a malevolent presence playing havoc with everything and everyone.  There was an entirely separate agenda happening at the same time involving blackmail, deceit, and extortion.  All-in-all, a very messy quagmire of conflicting facts and feelings.

That sounds like quite a tangled web.  Obviously whatever happened was finally put to rest for good and the two of you are now married and still living in the manor house at the estate.  How did all of that come about?

Donovan:  (Taylor started to speak, but Donovan got the words out first) For the answer to that one, you'll need—

Ah…I know what's coming next.  You're going to tell me I have to read the book.

Romantic Times review/4 out of 5:

Shawna Delacorte pens a fun read with lots of spooky ambience and a daring twosome.

CataRomance review/4 stars out of 5:

THE SEDGWICK CURSE by Shawna Delacorte is a spine tingler from the very beginning.  I spent a nail biting evening racing through the pages to a wonderfully, satisfying, aha ending.  Lovers of romantic intrigue and suspense will be totally captivated by THE SEDGWICK CURSE.

Every emotion is felt by the reader in this dramatic story which mesmerizes the reader as it builds to one shattering revelation after another.  A cast of secondary characters add spice to the story.

To learn the truth behind her great-grandmother's past—and the curse that still surrounded both her family and the old woman's tiny country village—Taylor MacKenzie made her way to England. But from the moment she arrived at her ancestors' manor house, an eerie chill echoed the evil of the past and a shadowy figure seemed to follow her every move.

Donovan Sedgwick, the new lord of the manor, had eyes that pierced Taylor's soul and held her in an otherworldly thrall. But he seemed ravaged by demons of his own—demons that only her kisses were able to calm.

She whirled around, her gaze staring into the darkness of the garden. Someone was watching her, staring from the safety of some hidden place. She gasped for air as if all the oxygen had been taken away from her.

"Who's there? Who…?" The words came out as a whisper then they died in her mouth. Her heart pounded in her chest and the sound roared in her ears. A wall of fear surrounded her. She forced her feet to move, to carry her toward the house. Her plodding steps turned into a run as she headed for the light at the kitchen door.

"Where have you been?" The words came at her from the darkness. A jolt of adrenaline raced through her body before she identified the voice as Donovan's. Then he grabbed hold of her arm and pulled her toward him….

THE SEDGWICK CURSE, a Harlequin Intrigue mystery/romantic suspense by Shawna Delacorte is available in ebook at http://ebooks.eharlequin.com (do search for author name Shawna Delacorte).  Also available from Amazon and other online vendors.  Excerpts and full reviews are available on my website along with information about my other Harlequin ebook reissues.  www.shawnadelacorte.com

Posted by Shawna Delacorte at 4:29 PM

I used to watch all those old horror movies, the Wolfman being my favorite. A bit more recent (but still classic) scary movie is The Haunting (the original). Sometimes the psychological suspense is more frightening than what you really see. Thanks for a walk down memory lane.