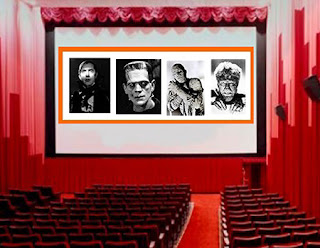 Today at Halloween time, we think of horror movies as being series such as Friday The 13th, Nightmare on Elm Street, and even a horror series titled Halloween. But these modern horror movies rely on slasher and gore for their fright factor.

What has happened to the scary horror movies from the past that traded on the atmosphere of fear rather than the visual of spurting blood and flying body parts?  The tingling sensation that made the hair stand on the back of our necks and goose bumps on our arms as our imaginations ran wild.  The spooky ground fog that slithered over and around the tombstones, cloaking the cemetery in an eerie silence and spectral glow.

I'm talking about the traditional horror classics from many decades gone by such as Frankenstein from 1931 with Boris Karloff's brilliant performance as the monster.  Also from 1931, Dracula with Bela Lugosi's portrayal of the vampire as both elegant and mesmerizing which left the horror to the imagination of the viewer.  The next year gave us 1932's The Mummy with Boris Karloff once again turning in a stellar performance, this time as the two thousand year old mummy in search of the reincarnation of his mate.  Then came 1941's The Wolf Man with Lon Chaney, Jr., as the stricken and cursed Larry Talbot.

True to Hollywood tradition, these classic horror movies spawned numerous sequels—Bride of Frankenstein, House of Frankenstein, Ghost of Frankenstein, Dracula's Daughter.  And as long as Hollywood was on a roll, they added to the profit factor by capitalizing on the popularity of the characters by having them co-star in such movies as Frankenstein Meets The Wolf Man.  Then there were the myriad remakes that came over the ensuing years, some serious attempts and others totally ludicrous.  Each one pushed the envelope in its own way in order to hopefully make it better (as in more box office dollars, not necessarily better quality) than its predecessor.

And the award for the most remakes over the years goes to Dracula.  Some were serious films and others were more on the ridiculous side with titles such as Dracula's Dog. And don't forget the use of the characters to sell products such as Count Chocula cereal from General Mills. And even Sesame Street has a character called The Count who, no surprises here, counts things.

With all four of the above mentioned original movies, the remakes never really captured the essence of the originals…in my humble opinion.

But these classic horror movies have done more than provide us with entertainment.  They have given us some valuable lessons for handling real life as well as those evil things lurking in the shadows.

9)  When it appears that you have killed the monster, NEVER check to see if it's really dead.

8)  If your companions suddenly begin to exhibit uncharacteristic behavior such as hissing, fascination with blood, glowing eyes, or increasing hairiness, get away from them as fast as possible.

7)  Do not search the basement when the power has just gone out especially if it was NOT knocked out as the result of a storm or if yours is the only house on the block without power.

6)  If appliances start operating by themselves, move out.

5)  Stay away from certain geographic locations such as: Amityville, Elm Street, Transylvania, Nilbog, the Bermuda Triangle…or any small town in Maine.

4)  If your children speak to you in any language which they should not know or if they speak to you using a voice which is not their own, be afraid…be very afraid.

3)  When you have the benefit of numbers, NEVER pair off and separate from the group (are you listening to this advice Scooby Doo gang?) or worse yet go it alone when searching the spooky old mansion for the source of the strange noises.

2)  As a general rule, don't solve puzzles that open portals to hell.

And last, but not least…

1)  If you find a town that looks mysteriously deserted, there's probably a good reason for it.  Take the hint and stay away!

Posted by Shawna Delacorte at 2:06 PM

Love it! One of the scariest I remember was The House On Haunted Hill. D. V.🦉

D.V. I had seen House of Wax in 3-D when I was probably not old enough to see it and I was scared big time.